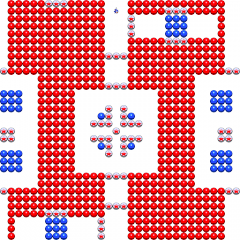 I’m really pleased at the interest the third puzzle has generated! Or maybe I just haven’t been able to stop talking about it… 🙂 Anyway, here is the first part of the solution:

The question asked us to investigate the world about which Sonic runs around in a certain special level. Let’s call that world

. I want to describe

as a topological suface. If you’ve not come across this notion before, you might like to think of a few key examples:

Perhaps now isn’t the time for a complete exposition of topological surfaces (okay, I may have got part-way through drafting one…!), that may come later. For the present I just want to say a few words about the Euler characteristic (which is denoted

) of a surface, and the formula that goes with it:

The first time I ever heard about this it was in the context of the Platonic solids, as follows.

(Can you see where this is going?)

You can check that the same formula

holds for the other Platonic solids – but it doesn’t stop there. What about other solids, for example the Archimedean solid the rhombicuboctahedron?

(I picked this one just because it has such a beautiful name.) The formula holds here too: we have

holds for this solid:

holds for all polyhedra that are topologically equivalent to the sphere

Let’s now think about the surface

that sonic explores. It is given to us equipped with a vertices/edges/faces structure so we can calculate

, each face has four edges and each vertex is the endpoint of four edges. We don’t seem to know how many faces there are, so let

be the number of faces. Then there are

is not topologically equivalent to a sphere. This is a negative answer to the first part of the puzzle.

On the other hand,

could be a torus, as shown by the following map for one of these levels:

[Map of a Special Stage in Sonic 3, copyright Sega (fair use of image for educational purposes)]

How does this show that

could be a Torus? You can see quite easily that the programmers have joined the left edge to the right edge and joined the top edge to the bottom edge. Thus, if Sonic walks off the left edge of the map, he will just pass round to the right edge (without noticing!).  This shape is quite easily seen to be a Torus. This is a positive answer to the second part of the puzzle.

In the third part, I asked about whether

could be a Klein bottle, and I’ll write a second post with the answer.

[Edit: perhaps it’s unfair to use the map of the level that I found online to argue that

might be a Torus. In fact the map (plus the description of how the edges are `obviously’ joined together) shows that

definitely is a Torus. If you didn’t have the map of the level then I think it’s reasonable to simply argue that a Torus can admit a vertex/edges/faces structure as seen in the level (i.e. with `square’ faces joined in fours at vertices). We’ll address the question of whether

must be a Torus in the second part of this answer, when I’ll also discuss the Klein bottle.]